It would be great for the preview to render tables using MultiMarkDown Tables. 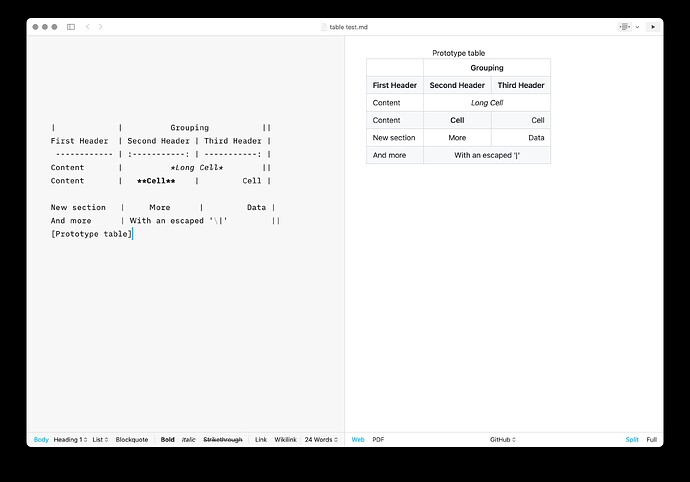 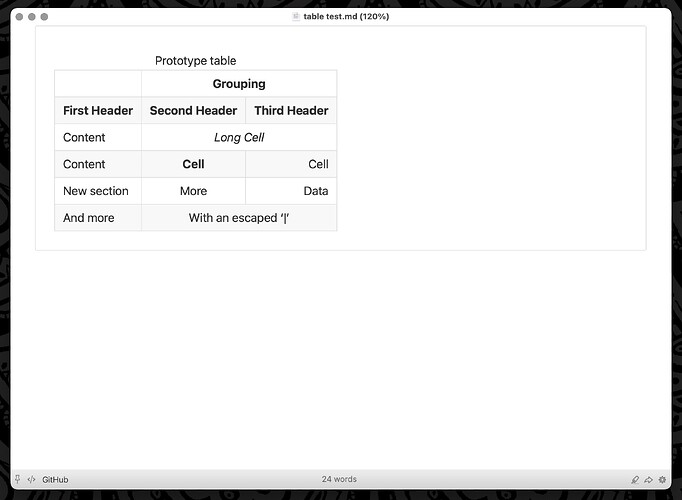 Thanks for your comment, @wgrace. To the best of my knowledge, Notenik already supports Markdown tables, as described in the Knowledge Base. If there’s some specific feature that’s missing, or a bug that you’ve found, let me know.

As an example, the Keyboard Shortcuts page is formatted using Markdown.

I see that the MultiMarkdown example does not come out well, although the Markdown Guide example does.

Let me look into this a bit further.

Argh, sorry! I’m reading the KB start to finish in small amounts and hadn’t arrived at the Tables section. I thought I searched for Tables in the Knowledge Base, but it must have been a quick web search.

This actually works plenty well enough for me.

And I wouldn’t want to leave off the | characters at the beginning of lines, which I think is partly what prevents rendering in Notenik.

Spanning columns would be nice, but not essential.

There are several notable differences between MultiMarkdown tables and what one might call more ordinary Markdown tables, as currently implemented by Notenik.

Here are the differences I can discern:

You can see, even in the Discourse parser, that not all of these MMD features are supported.

Here’s the example from the MMD documentation, as rendered by Discourse:

On the other hand, following is the example from the Markdown Guide, which renders just find in Discourse and in Notenik.

But you make good points, @wgrace, that Notenik does not fully support all of this stuff.

My question for you, and for others in the community, is how useful you would find these additional features?

There are several things about the MMD implementation that I find a bit troubling, in terms of my overall strategy for parsing Markdown, but that doesn’t mean I’m hard over about not implementing these features.

Thanks, as always, for your feedback.

My question for you, and for others in the community, is how useful you would find these additional features?

Honestly, I can’t actually remember the last time I used Markdown to set up a table with spanned columns.

So probably not that useful – especially when I could simply insert HTML should something more complicated be required.

Well, I think I’ve implemented spanned columns successfully. This feature should be available in the next release, which should be out in the next day or two.

11.3.0 is out now, and it implements spanned columns. Let me know if any issues!

Thanks @hbowie — working well so far.